Here's something you don't see everyday. Or do you? 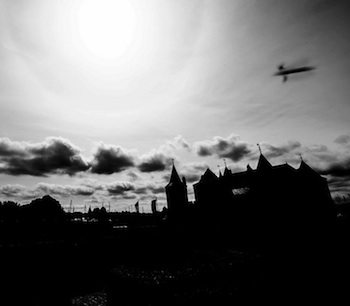 HDR cameras take photos in bursts of 3 or more allowing the photographer to choose the best of the three or best parts of the each for editing and creating composites.

In photographer Corinne Federer's case she was using a Nikon 800 and shooting in bursts of 5 photos.

In an exclusive interview with the Huffington Post, Federer said "In order to create HDR images, you take three or more exposures -- this one happened to be five -- and you shoot them all at the same time, because you then overlap the images and it gives you the full spectrum of light, which your camera can't capture but your eyes can."

The photo on the left was part of a burst that Federer took on May 25th, 2013, and according to her, upon later inspection, she decided to enhance one image to see if she could figure out what the object was.

"It was a tubular-shaped object that had an S-shaped fin on it. If it had been any type of missile, it would've had multiple fins, but facing the same direction. We heard nothing, it was completely quiet out. The more I flipped through the frames, it was kind of creepy," Federer said of the unidentified flying object in the Huffington Post interview.

When visiting Federer's website we learned that she often shoots in HDR. Federer is a photographer based in Amsterdam, and you can visit her website Elyktra Photoart by clicking this link.

Click here to read the Huffington Post article and to view more of the photos Federer took that day.