submitted by: Karri Pelikys - photos by her husband Stan Pelikys.

"It was January 2014, when my husband and I were at the Winnipeg Health Sciences Centre, staying with our son, who was in isolation for atypical pneumonia. Because we weren't patients, we often left his room to go to the main floor of the hospital to grab lunch.

One of these afternoons, we were walking back to his room and used the bank of elevators we usually use to take our lunch upstairs, in an older part of the hospital.  As we approached the elevators a woman around her 40's beat us to the punch and pushed the elevator to go up before we did.. so we waited in line directly behind her. 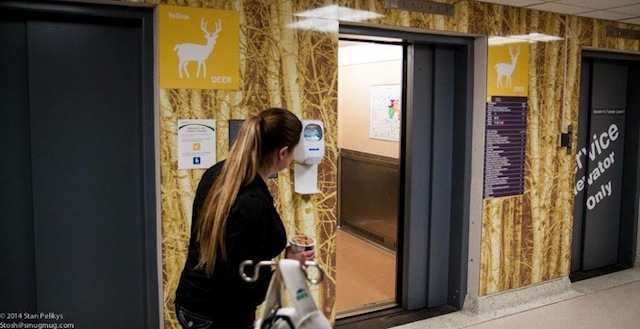 She had medium length, straight, blond hair, fair skin tone, a lab coat, lanyard, burnt orange coloured sweater and brown slacks, so we just assumed she worked there. When the elevator doors opened, she got in just a couple feet in front of us and went straight to the back of the elevator out of sight. Because the doors were about to close, my husband and I held back and decided to take the next round up.

Just as we stepped back.. the elevator door that had been about to close, opened again as if someone held the door open for us. That second time, my husband and I, who had been standing off to one side slightly, decided we'd get on after all. The moment we were standing square on, looking into the elevator, we both looked at one another in shock, because the woman who we both clearly watched walk in and who was as solid looking as any one, was no where to be seen.

This was an elevator with one set of doors so there was only one way in and one way out.  Each time for about the next four times that we passed that bank of elevators.. the door always opened even though it was empty every time. Not a frightening experience at all, but given how we'd both confirmed to each other what we saw, still really neat to witness."

We had a few questions for Karri about her experience. She replied quickly and (we felt) honestly.

Study Magazine features an article with the title "Are You Attending One of Canada’s Five Haunted Universities?" claims that "spectres of former staff and patients roam the hospital," and adds that "chances are the staff doesn’t need any help running their departments." This suggests that there are stories not only of hauntings, but of helpful ghosts as well.

It appears that Karri and Stan are not alone in their experiences.

Whether ghosts exist is a matter of opinion and experience. There are extremists on both sides of this question, as well as many level headed and experienced researchers trying to find the answer through various scientific methods and tests.

Besides, stories like the one Karri has presented are not easy to prove or disprove. We want to be clear and state we have no reason to believe that Karri and her husband did not experience what she has claimed. Lot's of things lack physical proof, and you have to take someone's word for it. For example, do you really know that the water you drink is made up of two parts hydrogen to one part oxygen?

No, the question we should be asking ourselves is if ghost is the correct word to use in this case. According to Wikipedia, the word ghost refers to a "soul or spirit of a dead person or animal that can appear, in visible form or other manifestation, to the living." (see en.wikipedia.org/wiki/Ghost for details)

One alternative, which fits what we see here, is an Apparitional Experience. Wikipedia definition states an apparitional experience is "characterized by the apparent perception of either a living being or an inanimate object without there being any material stimulus for such a perception. The person experiencing the apparition is awake, excluding dream visions from consideration." (en.wikipedia.org/wiki/Apparitional_experience)

So what do you think? Please add your thoughts to the comments box below.