I went to the Bell estate to do a preliminary ghost search, not expecting any activity when I got a couple of pictures that I have no explanation for. They have apparent orbs in the first of the pics, but no existing orbs in the second control shot taken within brief seconds of the first. 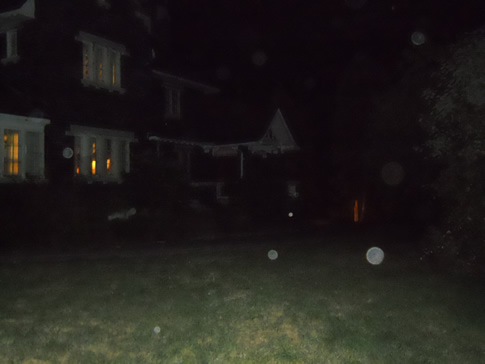 The conditions were favorable and there were no insects or condensation on the surrounding trees that can explain any orb shaped objects to begin with. I have no explanation for the results but I remain open minded and wait for logical explanations of my findings on this subject.

I have 4 photos and keep in mind,these are two different views,two shots each,with only 3 seconds between the retakes.

These were taken with a Nikon Coolpix camera, assisted only with its existing flash.These were taken at about 1:00 AM and the 2 sets are timed about 10 minutes apart,it had rained in the early afternoon that day but there wasn't any condensation remaining on the trees foliage, it was too cool for bugs and there was absolutely no breeze. I call this a result, you call it what you want, I only took the pics.

There are many reports of orbs in photos especially since digital cameras have gotten so popular.

While it is possible that there is a supernatural connection, there are other explanations that also need to be considered.

To read more on the topic visit the following links: