My cousin lived in an old farmhouse in the 80's near a small prairie town called Elstow in Saskatchewan. Her father owned and operated the hotel there during that time although it no longer exists today. My cousin was going to bartend at the hotel beverage room; her husband was working in Saskatoon, about 40 miles away. They could not believe their good luck when they found this place for rent at such a cheap price. It was an old house but not decayed like it is today. 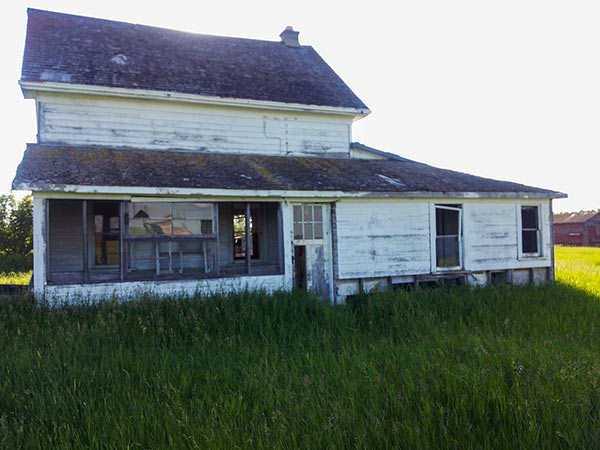 The farmstead was situated perhaps a half mile from the highway and then maybe another mile to the hotel but it was very isolated, absolutely no neighbours within view. My cousin experienced footsteps on the stairway or downstairs and at times would smell the scent of oranges in the kitchen. Her husband was away a lot working shift work and she was becoming increasingly uncomfortable living in that house.

One evening she had friends over and they were enjoying a few brews by a bonfire just after dusk when this guy and girl appeared out of nowhere acting very strange. Their clothes were odd as if they had attended a costume party...she said they were dressed in old fashioned clothing. The guy was muttering and acting strange. He tried to climb the windmill in the yard which was already rickety and dangerous even back then. The pale, oddly dressed girl never said a word. The guys in the group told the couple to get the hell out or they'd call the cops and they left. It was pitch dark outside when they walked toward the highway disappearing into the night. Everyone agreed that they were freaked out by the pair. Several hours later the RCMP drove into the yard asking if they had seen a girl, as motorists on the highway reported seeing a girl in torn clothing, running down the road. They told the Mountie what had occurred earlier that evening

Soon afterward my cousin and her husband moved out. She could not face a long, isolated winter living there. Her nerves were shot. Strangely after moving out the locals told her it was a well-known haunted house and they thought she was already aware of that. She was not!

My story enters on July 1 2013. For years when I drove to Manitou Beach near Watrous Saskatchewan, I would look for the house as I passed. You can only see the distinctive windmill which identifies the farmstead on the drive back. My friend, Darlene, who is very sensitive, was with me this day and I impulsively decided to stop and check it out. I felt compelled.

The house had never been lived in since my cousin rented it and moved out. Now it was very dilapidated. The road had grown in so we drove as far as we could on the dirt road and walked in the rest of the way. There was a marshy water- filled moat around three sides of the old farmstead which did not exist when my cousin lived there.

I honestly felt a weird feeling growing within me as I approached the house and it was Darlene who voiced that same feeling. I started snapping pictures with my smart phone and was drawn over and over again to one specific area. I was thinking to myself that there was a female presence at work and again Darlene turned to me saying the same thing! Then out loud to the house in general, I held my phone up with the sound record on. I said that my cousin and her husband were the last people to live in that house and I wondered if they remembered her. Then I spoke her name. Suddenly there was an extremely loud bang that came out of nowhere! Darlene screamed and the hairs on my arms stood straight up.

It was a super-hot, windless day but I suddenly felt very cold. Darlene had had enough and wanted to go, so we headed back to my vehicle. When we got there I listened to the recording. It recorded everything until the second before the bang and then abruptly stopped. I looked over the pictures looking for anything unusual but didn't see anything out of the ordinary at that time.

Much later, in early September when I was checking out the pictures again I saw a female form in the entrance of the shed. The picture was taken through a bashed out window that looking through another bashed out window which showed the shed in the backyard. The image made my heart freeze. I was positive nothing was there the first time.

The pictures I shot before the recording do not show that image even though I shot at the exact same spot. They are not great pictures and I suck at photography but I get a jolt every time I zoom in and see that form. I get a feeling of negativity combined with an energy that is somehow very sad and defeated.

There are several stories around of energy that is attached to a building. More typically, people will refer to this as a haunted house.

Some people strongly believe that the experience Sheri herself had can be attributed to magnetic disturbances, infrasound (as we reported on recently) or simply an expectation that something extraordinary might occur. We're not so sure.

The story that Sheri is presenting to us is interesting. Very interesting. In fact, we'd like to know if there is a paranormal investigator in the Elstow, Saskatchewan area that would be willing to investigate this story and the history of the house further. If you know of anyone, have them email the This email address is being protected from spambots. You need JavaScript enabled to view it..

We'll update you on this as soon as we have something more to share. Check the side menu above to Subscribe to our NewsLetter for monthly articles and links to stories of things that are unexplained.