In 2010, on our way back from a video shoot in Sault Ste Marie, we stopped in Blind River, Ontario for a coffee and to stretch our legs. There was an interesting sunset happening, and Tracey Sanders started snapping photos. 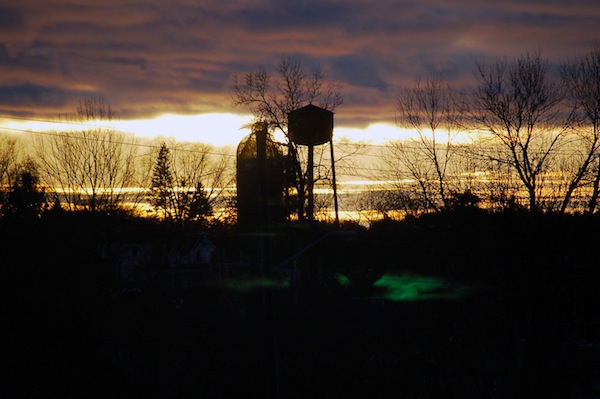 When we looked at the photos later we saw this green glow in several of them.

Blind River, Ontario is an old Northern Ontario town, who's history is rich in stories of fur trading dating back to the 1780's, mining in the 1950's onwards and in the 1990's received continental recognition for a double murder that took place at a rest stop in the area.

We did not see this glow when we were standing there. It was only afterwards when Tracey was looking at the photos in her viewfinder that we saw the green glow in some of of the pics.

At first we thought it might have been a problem with the camera, but when we looked at more of the photos we saw that the glow was slightly different in each.

That is when we both felt  creeped out.

A few months later we were on our way back to Sault Ste. Marie on another business trip. It was much earlier in the day and we saw that we had been taking photos overlooking what appears to be the water treatment plant. The glow was created by the camera sensor, and how it  was interpreting the color of the gas being discharged from the plant. Something we could not see with our eyes.