About: Fact or Faked - Paranormal Files

Have you seen Fact or Faked: Paranormal Files? If not, you should. This documentary/reality program has been on the air since 2010 and originates on the American channel Syfy. 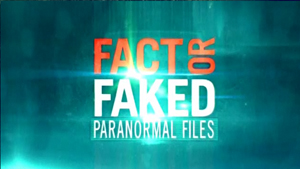 It has a simple premise. In each episode, the investigation team reviews several video clips claiming supernatural activity, decide which two cases are to be investigated that week. The team then breaks into two groups and we follow each as they investigate their stories. The team is led by Ben Hansen, a former FBI agent and consists of a noted paranormal researcher, a photographer, a journalist, a stuntman/special effects expert and a technology expert.

Part of their criteria for an investigation are as follows: is the footage compelling, are the witnesses credible and is it something they can attempt to reproduce or test.

As described on the Syfy website - Fact or Faked: Paranormal Files revolutionizes paranormal programming by uncovering the truth behind supernatural and unexplained occurrences that have been caught on camera. In each episode, the team searches for the most intriguing images, videos and unnatural phenomenon found online and around the world. After selecting the most compelling cases, they head into the field, attempting to recreate the video, carrying out key experiments and questioning eyewitnesses. The team investigates all the clues and evidence with the most advanced techniques and tools at their disposal, and their objective is to answer the question, "Is this real?"

In their investigations they manage to prove reasonable explanations for most events. They are able to show what is hoaxed, how it was likely accomplished and will often show how or why something was misidentified. They're professional, and take what they do seriously.

If they cannot explain how something was done, it's after significant effort has been made to do so. They've done numerous nighttime investigations and played several recording of electronic voice phenomena (EVP) that are fascinating.

Have you ever experienced something you cannot explain?  Click here to Tell Us Your Story.