On Tuesday, July 29, 2008, the CBC reported that Helen Pahpasay and her mother claimed they saw what might have been the legendary Sasquatch in northwestern Ontario the previous week.

The two women from Grassy Narrows, Ont., said they went to pick blueberries when they spotted a large figure from their truck. 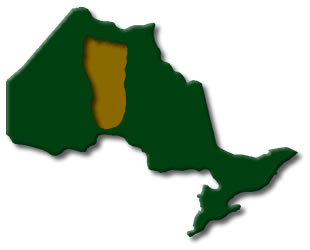 Helen Pahpasay told CBC News that the creature was black, approximately eight feet tall and walked in an upright, husky manner. Not like a human would normaly walk.

"It was black, about eight feet long and all black, and the way it walked was upright, human-like, but more — I don't know how to describe it — more of a husky walk, I guess," she told CBC News.

Pahpasay said, once the animal saw them that it ran off into the bush. She and her mother discussed following it, but instead decided to go home as they were shaken up by the incident.

At the time of the story Pahpasay said she did not know what the creature was, and hesitated to say it was a bigfoot or sasquatch.

The team at ParaNorthern.ca will be pursuing an update to this story in the near future.

Have you seen evidence of a bigfoot when you were in the bush? Northern Ontario encompasses over 800,000 square kilometeres of land, much of which is covered in dense boreal forest. Although skeptics say it is impossible for such an animal to have gone undetected for so long, anyone who has spent time in similar lanscapes would know differently. It's easy to make statements on what's possible and impossible when you're sitting behind a desk in downtown Toronto.

And besides, in 2010 many of these same experts were claiming that cougars are still extinct in Ontario, and that reported sightings were likely misidentified lynx. Having seen both a cougar (just north of Parry Sound in 2008) and a lynx, I'd have to say it's difficult to confuse the two based on size and colour alone. The tail was a more obvious difference and a dead giveaway.

We've heard rumours of bigfoot sightings in northern Ontario, but no one has come forward with their story or photos. At least not yet.